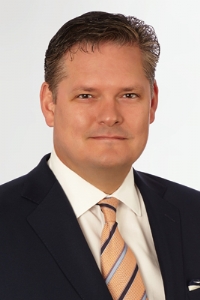 The most successful businesses don't just outperform their competitors. They redefine the terms of competition by embracing new and different ideas while their rivals choose to maintain the status quo. Given the intense competition in today's marketplace, litigation often plays a significant role in shaping a business's bottom line. This is true whether the business is advancing its interests or defending them. Who will shoulder the task?

Sam Joyner is a West Point graduate and former Airborne Infantry Ranger with over twenty years of experience in building valuable, trusting relationships. The value of relationships based on individualized concern and self-sacrifice was instilled in Sam as an army officer, where decisions regularly involved life or death matters. When Sam became an attorney, he carried with him those same beliefs. As one of his first clients said: "If we can trust you with our lives, we can certainly trust you with our legal problems."

Sam is passionate about two things. Building extraordinary trust with the clients he serves and delivering value and bottom line results when quality interactions matter.

Speaker, Luck Doesn't Get You to the Bar, The University of Tulsa College of Law, Professionalism Day (2012)

Co-Author, Nonperformance of Contractual Obligations Resulting From the Restricted Credit Market: Is There a Way Out?, TEXAS LAWYER (June 1, 2009)